It’s crazy, I know. But I just finished drinking a smoothie that has spinach as one of the ingredients. And it was really good. And by good, I am referring to the taste, not the healthiness. No, really. I do love healthy foods, but more importantly, I love foods that actually taste good, and quickly cast aside those that don’t. Like the black bean brownie recipe I tried. They were vile. I would never serve or suggest them to anyone that I actually like. But strangely I am now sitting here writing about adding spinach to a smoothie. Crazy. I know. 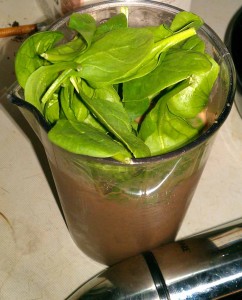 I can’t recall what website I got the idea from, but I recall having read that the spinach added a creamy consistency but that the spinach flavour is quite mild and so the other flavours in your smoothie are likely to overpower it. I do love an experiment, and I am currently on a mission to find more ways to eat vegetables in my snacks. Let’s face it: no matter what diet or nutrition approach you believe in, I think the one area where we all agree is that more green vegetables is a good thing.

And so I introduce to you my recipe for Chocolate mint smoothies:

I came up with this recipe (excluding the spinach) after reading Molly Galbraith’s blog entry chock full of amazing protein smoothie recipes. That girl is creative with her smoothies! It had never occurred to me to include things like cocoa powder in a smoothie. Brilliant!

I didn’t know how much spinach to add, so I went to google to get some ideas, and I saw the 2 handfuls recommendation from the Incredible Smoothies website, so figured I’d try it.  I blended the ingredients without the spinach first, then blended in one handful of spinach and gave it a taste. I was impressed. But it did seem that the spinach absorbed a bit of the peppermint flavour that really makes this smoothie, so I added a few more drops before adding the second handful and blended again.

It still tasted delicious – my taste buds could not find the spinach flavour over the chocolate and peppermint. But what did happen after the second handful is that the colour got a little light, and there remained some specs of green – evidence of the spinach that some might not care for. After drinking a few sips, the colour didn’t bother me anymore. Maybe I was over-reacting? You can decide for yourself: the first picture is a version of this smoothie I made a few weeks ago without spinach. The second is the one I just made with spinach. 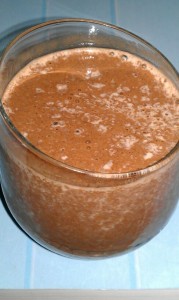 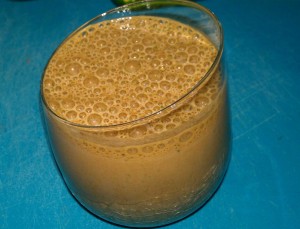 Now if the colour is too light for you, or if the bits of green don’t appeal, then I would suggest trying it with only one handful of spinach instead of two. Maybe I didn’t look at it closely enough after one handful, but I did look, and it seemed amazingly normal looking.

Lastly, I remembered that the first few times I made the smoothie that I added crushed mint leaves. I stopped doing that primarily because I felt the peppermint extract provided enough colour. But after making this, I realized that if you were making this smoothie for someone and didn’t want them to know there was spinach in it, you could always add a bit of crushed mint and as you’re serving it, make a point to mention that. I’m not suggesting that you overtly lie about the spinach; just that you highlight the crushed mint instead so that nobody asks about the green specs. Your call.

Give this recipe a try with or without the spinach. It’s unbelievably tasty.

Wondering about the nutritional facts? Here are the numbers:

Note that I use one scoop of protein powder, which in this case is half a serving. If you want a higher calorie snack, then go for the full serving, but personally I suspect that most protein powder suggested serving sizes are holdovers from the days when male body builders were their primary consumers.

There’s more experimenting underway! I’m currently trying out a zucchini-based pizza dough. I’ll admit that I’m skeptical as I have scoured the internet and basically found permutations of only 3 different recipes, each of which suggest that the creators don’t understand that there is chemistry in baking. We shall see…

Elsbeth Vaino, B.Sc, CSCS, is a personal trainer in Ottawa with a passion for healthy, AND tasty foods.

PS – don’t forget to check out Molly’s protein smoothie recipes. She’s got some really good ones.