This is the fifth entry in my barefoot running journal. Head over here to start at the beginning.

Sometimes I wonder if we take things too literally. I started thinking about this in terms of minimalist running. I have been running in my New Balance Minimus Trail running shoes. They are extremely minimal, having no cushioning whatsoever. It is a trail shoe, and I bought them primarily for trail running, but also for occasional city runs. And this is what I have done; with gradual increase in mileage. All is well, but on one of my runs last week, I was in a position where I was running on a sidewalk that was lined with a patch of grass between the sidewalk and the road. I moved over to the grass as I passed a couple with their stroller and was struck by how different it felt.

That’s when it really hit me: we can’t really apply the notion of we were “Born to Run” to the modern urban situation. Our ancestors may have run barefoot, but they didn’t do it on concrete. Natural ground, whether it is grass or dirt, has built in cushioning. It provides a dampening effect for every step, reducing the force that is transferred to our body when we run.

As soon as I noticed that, I opted to run on the grass as much as possible for the rest of that run, and noticed a considerable difference in comfort. Running in my minimalist shoes on grass felt amazing: I could almost feel  my feet moving in response to the ground. But as soon as I moved  back to the concrete, my body had to adapt to take on the additional impact. There has been no pain from running on concrete, so perhaps it will be fine, but it doesn’t feel as right as running on grass did.

And the more I thought about it, the more I considered that if we will run on concrete, we should have some cushioning in our shoes to mimic the cushioning that the natural ground would give us. I started to think that the guy who sold me my shoes was half right (click here for that story). He had suggested that I buy a less minimal shoe as a transition shoe before moving into the completely minimalist shoe I have now. I still think that was bad advice for someone who was just ramping up their running. I think if he had suggested the transition shoe as a sidewalk shoe, it would have been excellent advice. In fact it also makes me think that Vibram Five Fingers are ill-advised for city running, although they seem to have developed a degree of popularity among runners. I wonder if that will last? Anyone reading this who has been running in Vibrams in the city for a while? Care to share your experience? Either as a comment below or send me an email through the contact form and I’ll post it as a guest blog.

I still think there is validity to the minimalist footwear movement and the emphasis on more of a midsole strike instead of a heel strike. Since this revelation I have gone for a couple of runs in my funky old Adidas, which have no support but a small amount of  cushioning; and in my fun new Adidas Adizero training shoes. They are similar to my funky old Adidas in support and cushioning but a little less worn down. 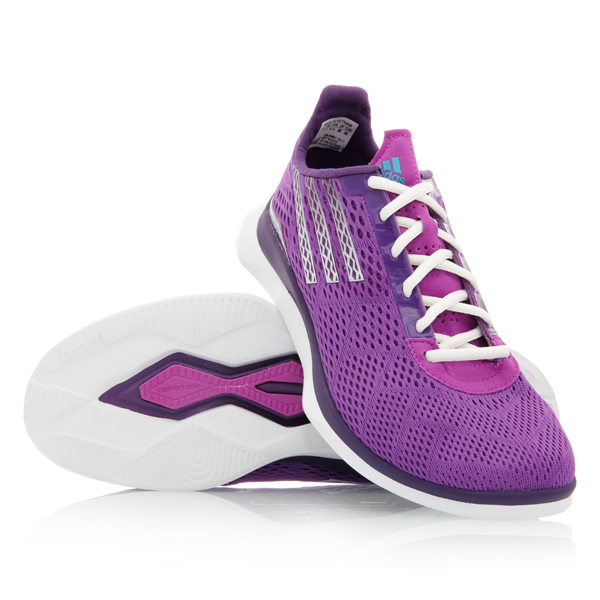 Much better! They provide enough cushioning that they are comfortable on concrete, but not so much that I lose touch with the ground and revert to heel striking.

If you’d like to circle back to the beginning of my barefoot running journal, you can get there with this link. At the end of each entry there is a link to the next one.

Elsbeth Vaino, B.Sc, CSCS, is a personal trainer in Ottawa, Canada. She works with clients of all types, but most come to her for athletic performance, reducing injury risk, and returning to activity after injury.